Human Trafficking: Road Warriors Unite to Save the Vulnerable

In January 2015, long-haul driver Kevin Kimmel entered a truck stop outside Richmond, VA, for a rest break and to complete his log. As he worked, he observed men gathered around a nearby RV. And he saw something else: a young woman's face at the window—but fleetingly, as though someone inside the vehicle had pulled her from view.

That face—forlorn and so very young—told Kimmel he had two choices: remain uninvolved or telephone local authorities about a possible crime in progress. Trusting his instincts, Kimmel chose the latter, setting off a chain of events that rescued a 20-year-old from horrific physical and emotional abuse and, said the medical professionals who later cared for her, probable death.

One phone call. And one life saved.

Kimmel’s involvement in this story—and its outcome—demonstrates the formidable purpose of Truckers Against Trafficking (TAT), a non-profit organization that mobilizes transportation industry professionals to partner with law enforcement and, through education and empowerment, combat the merciless tragedy that is human trafficking.

“Human trafficking has surpassed arms trafficking and is second only to drug trafficking—the largest criminal enterprise in the world,” says Kendis Paris, TAT Executive Director and Co-Founder, speaking to why the profitability of trading in human lives makes modern-day slavery so prolific. “A dealer sells a weapon or a drug once—but humans can be sold again and again. Human trafficking can be found in a variety of places, from organized crime, within rival gangs that have come together to traffick individuals, to families—when parents sell their children.”

Potential victims are enticed with offers of money, a better life or legal documentation; parents with addiction problems may barter their children for drugs. Among homeless youth, traffickers often are misguidedly viewed as protective figures. Once trapped, victims are kept in place by physical and emotional abuse plus threats to their families.

Says Paris, “You have people who are bent on greed and power. And it’s not merely the trafficker. Buyers fuel the demand. It’s not enough to help the victim and arrest the trafficker; we also need to hold sex buyers accountable for their actions. Sex trafficking is paid rape, plain and simple.”

Fighting Traffickers is a Collective Effort 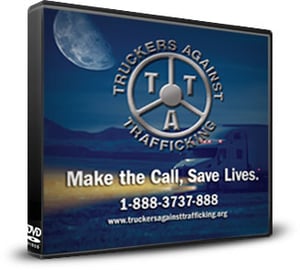 TAT has experienced dramatic expansion since its 2009 founding; today, its many outstanding resources include wallet cards and cab window decals that drivers can use while on the road; DVDs, posters and brochures; educational webinars (Trimble, a silver sponsor, hosted a November 2018 session); and Busing on the Lookout (BOTL), which features steps tailored to bus drivers and station employees who may see questionable activity in or near terminals—a prime recruitment spot for traffickers.

TAT also works with law enforcement throughout the US, educating them to recognize, engage and ultimately advocate for human trafficking victims; and with local and national politicians to bring about anti-trafficking legislation.

As the organization’s reach grows, so does its ability to convey its mission. Ashley Smith, TAT Oil and Gas Program Manager, is working to reach the fuel industry with the message; at times, training attendees will approach her after a session and reveal incidents they’ve experienced while on the road.

Says Smith, “Sometimes at a trucking event, after we’ve explained ways to identify human trafficking, people will tell us they feel guilty—that they didn’t recognize what they’d previously seen. Now they’re empowered, knowing they can make a positive change in the future, and help others make that change. It has the ripple effect.”

And the empowerment is evident: in the testimonials and success stories recorded on the organization’s website, in the awards that denote its accomplishments in battling human trafficking, and by the sponsorship from some of the most recognizable names in transportation, which stand with TAT and provide the funds that allow it to persevere and thrive. 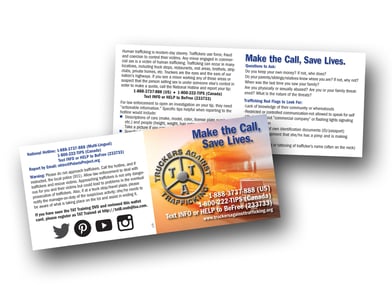 Now entering its tenth year of leadership and advocacy, TAT has new and ambitious strategies in position. Immediately on deck: deploying into all 50 states the Iowa Motor Vehicle Enforcement Model, which will grant local and highway police greater authority to combat human trafficking.  As well, TAT is working with cross-border organizations to expand into Canada and Mexico, and strengthening its efforts with law enforcement and legislators.

Says Paris, “We’re one piece of the broader abolitionist movement. We’re activating trucking and busing, we’re activating law enforcement, and working with colleagues who specialize in legislation. This is the goal: to close the loopholes.”

She reflects a moment—then continues:

“People bent on doing evil will find a way—but we can make it more difficult for them and make the risk outweigh the reward. We’re building a mobile army of transportation officials who can identify and disrupt modern-day slavery—a global model that can be expanded anywhere you have victims of human trafficking.”

Four years ago, trucker Kevin Kimmel made a phone call that helped save a young lady trapped in sexual slavery and led to the incarceration of the perpetrators. For one young victim, the nightmare ended—but for countless more it continues.

Learn how TAT is rousing the transportation industry to its crucial role in impeding—and, perhaps, someday ending—the intolerable act of human trafficking.

To join the effort by getting your business involved, visit the Truckers Against Trafficking website.